Spice Up Your Playing With Moveable Open String Chords 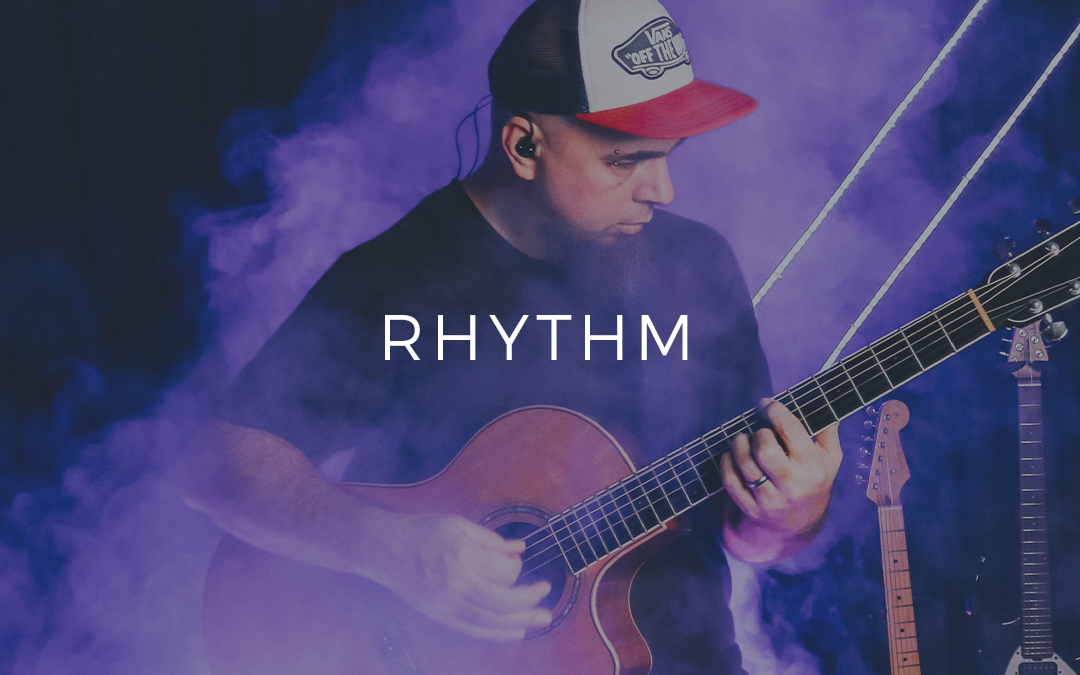 Awesome sounding, yet easy to play Chord Voicings in the Key of E...

The chords taught in this lesson are beginner friendly, however in order to play the rhythms and picking patterns in this lesson, you would need some experience with basic rhythm guitar technique.

In this lesson you’ll discover a series of helpful voicings in the key of E to spice up your rhythm guitar playing.

A competent guitarist has a wide range of chord voicings available so they can choose to use whichever voicing best fits the song they’re playing.

There are literally thousands of ways for you to play a simple progression and in this lesson I’d like to introduce you to moveable, open string chord shapes.

That might sound like a misnomer because typically moveable chord shapes on the guitar don’t have open strings.

That certainly is the case most of the time, however there are some chord shapes that are a combination of moveable fretted notes across the neck along with open strings.

These chords are especially useful if you’re looking for that jangly sound without reverting to the typical cowboy chord shapes.

Plus, they work equally well on the electric guitar as it does on the acoustic guitar and should give you a few additional choices when it comes to choosing chord voicings in the key of E.

For this example I used a Tone Junkie Profile on my Kemper Profiler. Here’s a quick breakdown:

The first pedal in the chain is a compressor with very mild settings, The intensity is set to around 3.0, The attack is set to around 2.6, Squash at 0.0, the Mix is at 85% and the volume is +1db.

The second element in the chain is the pure booster, which is adding a few decibels of gain to drive the amp a bit harder.

Next up is the amplifier which is a profile of a Matchless Spitfire with its matching 2x12 cabinet equipped with H30 Match Modified 30 watt speaker.

Next up we have the soft shaper with the drive knob on 1 and adding 1db of gain.

Lastly we have a natural reverb with a decay time of 8.7 seconds pre-delay of 110ms and the mix around 54.1%

So what exactly is a moveable chord shape with open strings?

In short it’s a chord shape with a combination of fretted notes and open strings that can be easily moved around the neck to produce different types of chord types and sounds.

When you move a chord shape up and down that doesn’t involve any open strings, then the chord type will remain the same since the relationship between all the notes remains the same, regardless of where you play it on the neck.

However, that changes when you add open strings to the mix because now the relationship between the notes changes due to the fact that the fretted notes are moving around, while the open strings remain static.

Check out the video below for a quick demo on this concept.

As you can see in the video there’s a wide range of applications available when it comes to these moveable chord shapes.

I cover all those shapes along with a few different approaches in my Killer Chords Course which covers 101 voicings like these.

For this lesson though, I’d like to focus on the key of E using the moveable Asus2 shape along with a few variations.

This is an E power chord using a shape that might be familiar to you. The only difference is that we’re adding in the open E and B strings.

Here we have the exact same shape as the previous chord moved down to the second fret resulting in a Bsus4 chord.

Again it’s the same shape as the previous two chords, except we’re playing this one from the 4th fret giving us C# minor seventh chord

As you can see, this is the same shape as the previous two chords, but the open A string is the root note as opposed to a fretted note with the previous shapes. This Asus2 is essentially the chord shape that we’re moving up and down the neck.

When you string those four chords together you’ll get a 1 5 6 4 progression in the key of E. Go ahead and try it out!Here’s a quick demo of these four chords in action

Before we get to the examples, I’d like to show you a few more approaches you can use to get some more mileage out of these chords.

Instead of moving the chord shape up and down the neck, I can leave the chord as is, and just change the lowest note for each chord as you’ll see in the following shapes.

When you move the first finger to play the B note on the 6th string as the root, you’ll get a slightly different Bsus4 voicing.

And here we have another variation of the C#m7 chord by moving the root note to the 9th fret on the 6th string.

When you make the open A string the root note, you get an Aadd9 with no 3rd. It’s a pretty cool shape and it fits in perfectly with the previous three voicings,

Here’s a quick demo of these chord shape variations.

Alright, now that you’ve seen the shapes let’s check out some examples so you can see these chords in action. 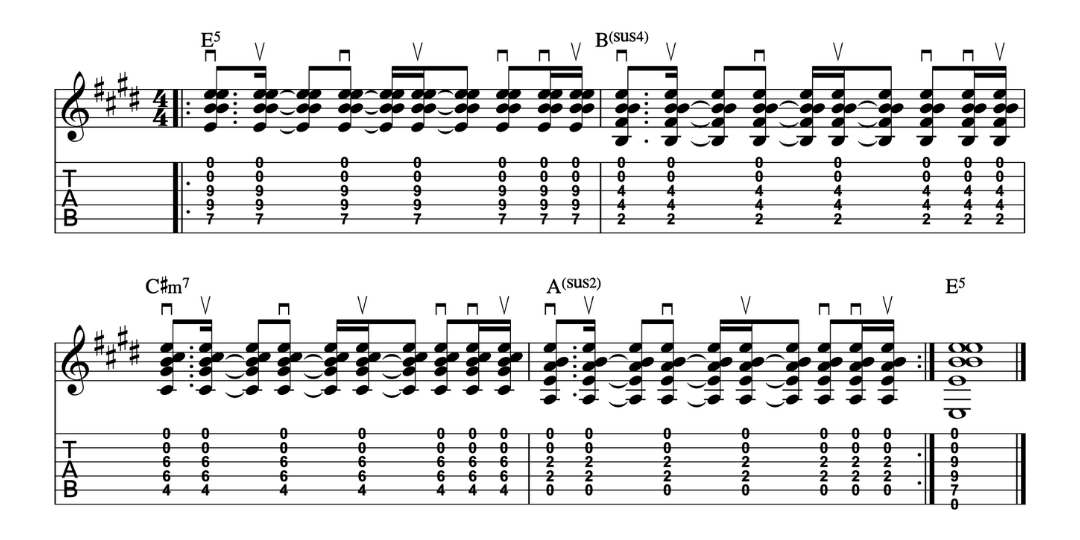 Now let’s use a similar strumming pattern along with the moveable root note voicings we looked at earlier. 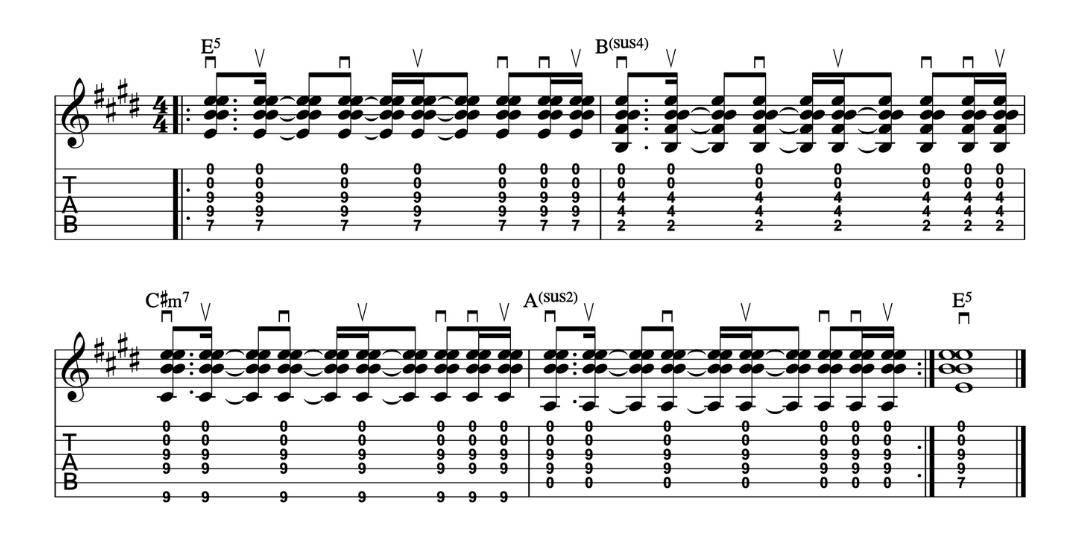 This is the same progression and chord shapes as the first example, except this time I’m using a cool picking pattern to create a different vibe. 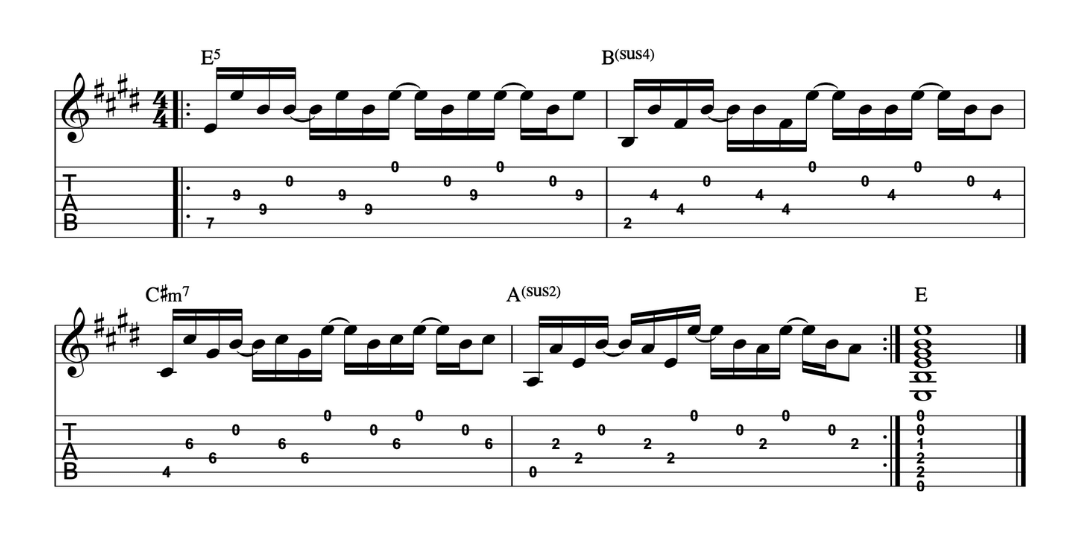 Here we have the same progression and chord voicings as example two but played with a picking pattern. 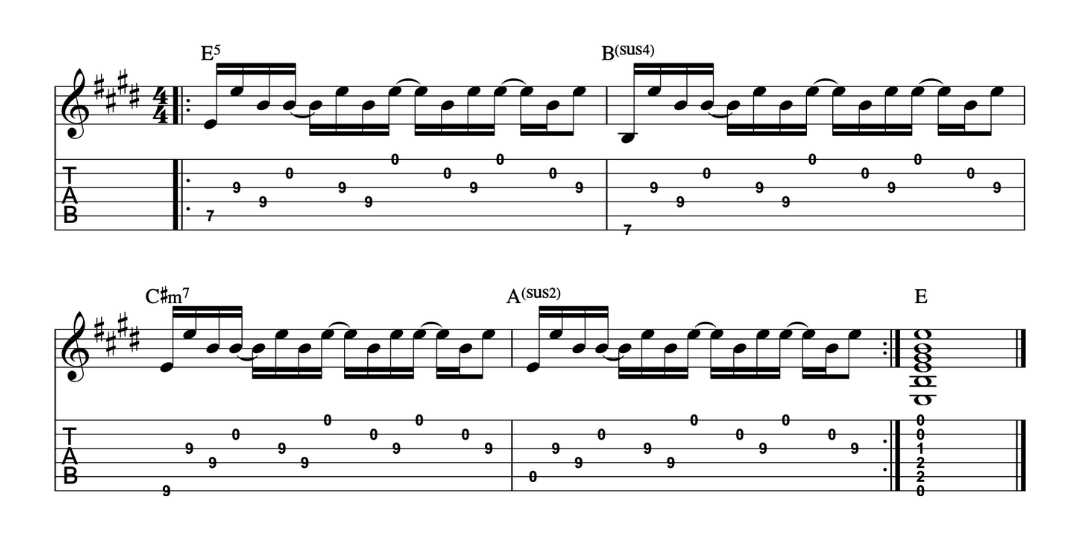 Now let’s use those moveable Asus2 chord shape voicings, with a palm muted rhythm along with some carefully placed accents. 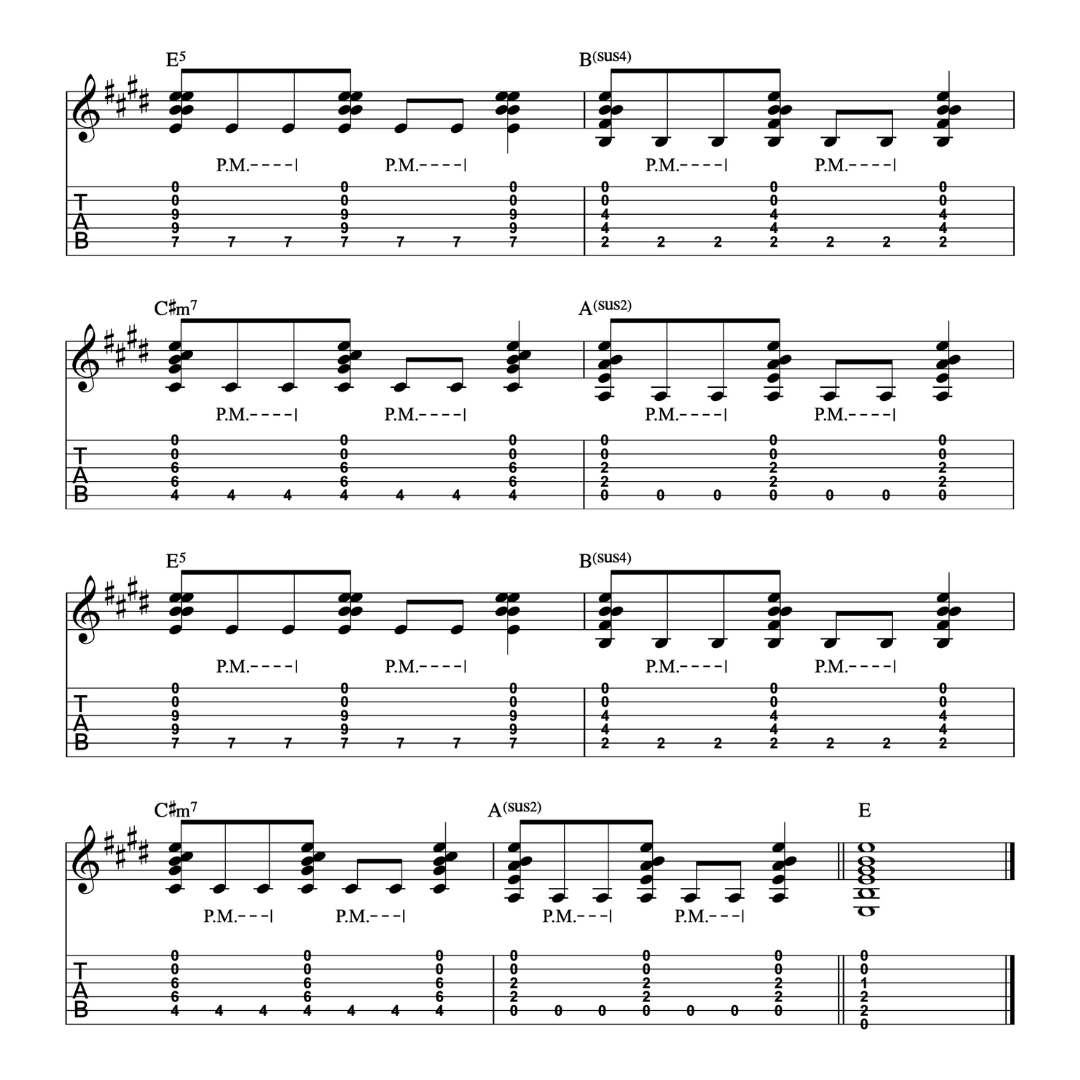 And finally, let’s use the same rhythm as the previous example with the moveable root voicings 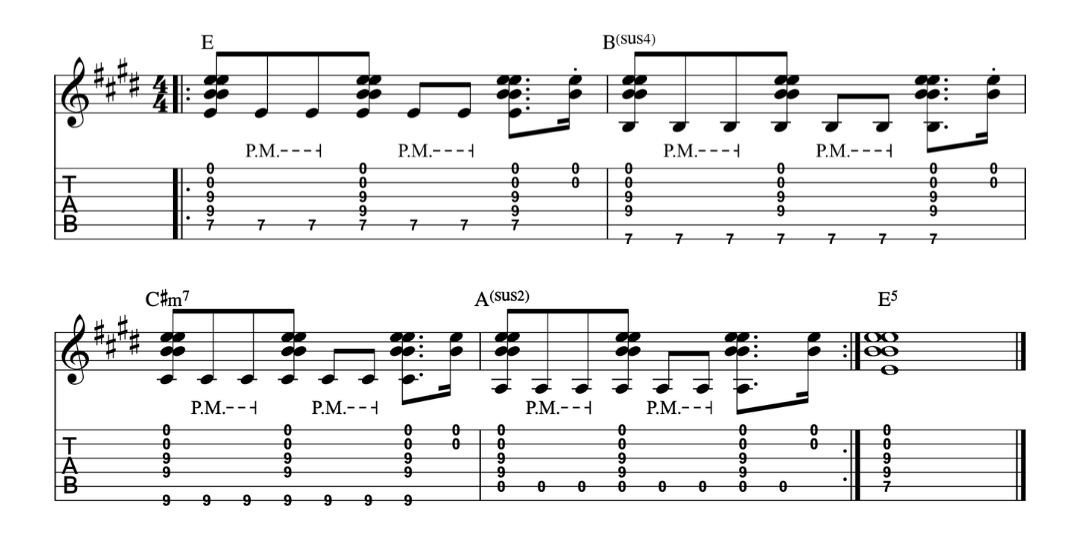 Here’s a jam track without guitar so you can practice these chord shapes and come up with your own parts.

So there you have a couple of new chord voicings along with some interesting rhythmic and picking approaches. I hope this lesson has given you some new ideas and in the next issue we’ll add another layer to this.

Consider picking up a copy of our Worship Guitar Skills Practice Pack.

It comes with additional training on the different types of modern worship guitar parts along with a powerful set of backing tracks in different keys, progressions and tempo so you can practice your guitar parts in a musical environment with worship focused backing tracks.