How To Use Rhythmic Accents To Spice Up Your Playing 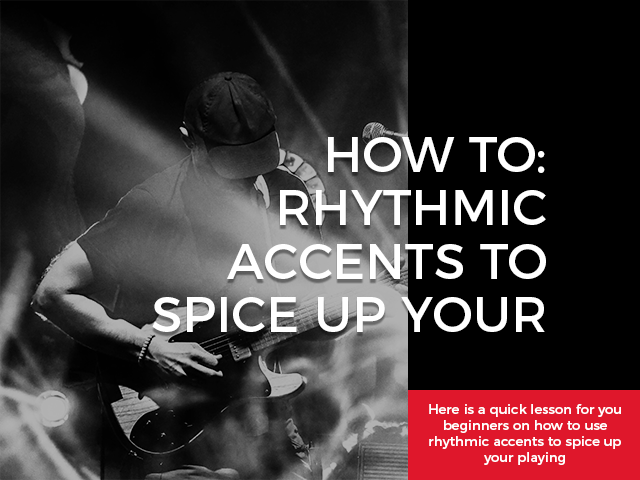 Are you new to playing electric guitar in a church setting?

Well then buckle up because I’ve got some tips on how to use rhythmic interest in your melodic playing!

Why rhythm, you ask?

That’s easy, one of the main jobs of the Electric guitarist is to add drive and forward-moving momentum! The way you do that is by using specific rhythmic techniques as well as adding to the harmonic context (that means individual notes played together to form chords).

So that was a simple 4-chord progression:

That’s just a simple power chord progression, except for the A/C#.

Then I took those an octave higher! I played the same shapes just in a different place on the fretboard - have a look:

This style of playing is very common in Worship music!

Well first of all, a tone like that is going to cut through the mix while adding some grit and texture to the sound.

Secondly, the rhythmic content of what I’m playing here drives the song, but it also has rhythmic interest because of the way I am playing accents!

And last, but definitely not least, I am paying close attention to the chords which means I am highlighting the harmony!

This is a winning combination!

The simplest form to play this is just by using eighth-notes and an all-downstroke rhythm as you can see in the video:

That sounds cool if you’re a brand new beginner! But it can get a little boring! The way to ramp it up is by playing very strategically-placed accents like this:

So, if you’re a beginner guitarist, watch this video a couple of times and practice what I showed you here. These are very useful rhythmic patterns that you will be able to use every week without a doubt, plus they sound great on an acoustic guitar as well.